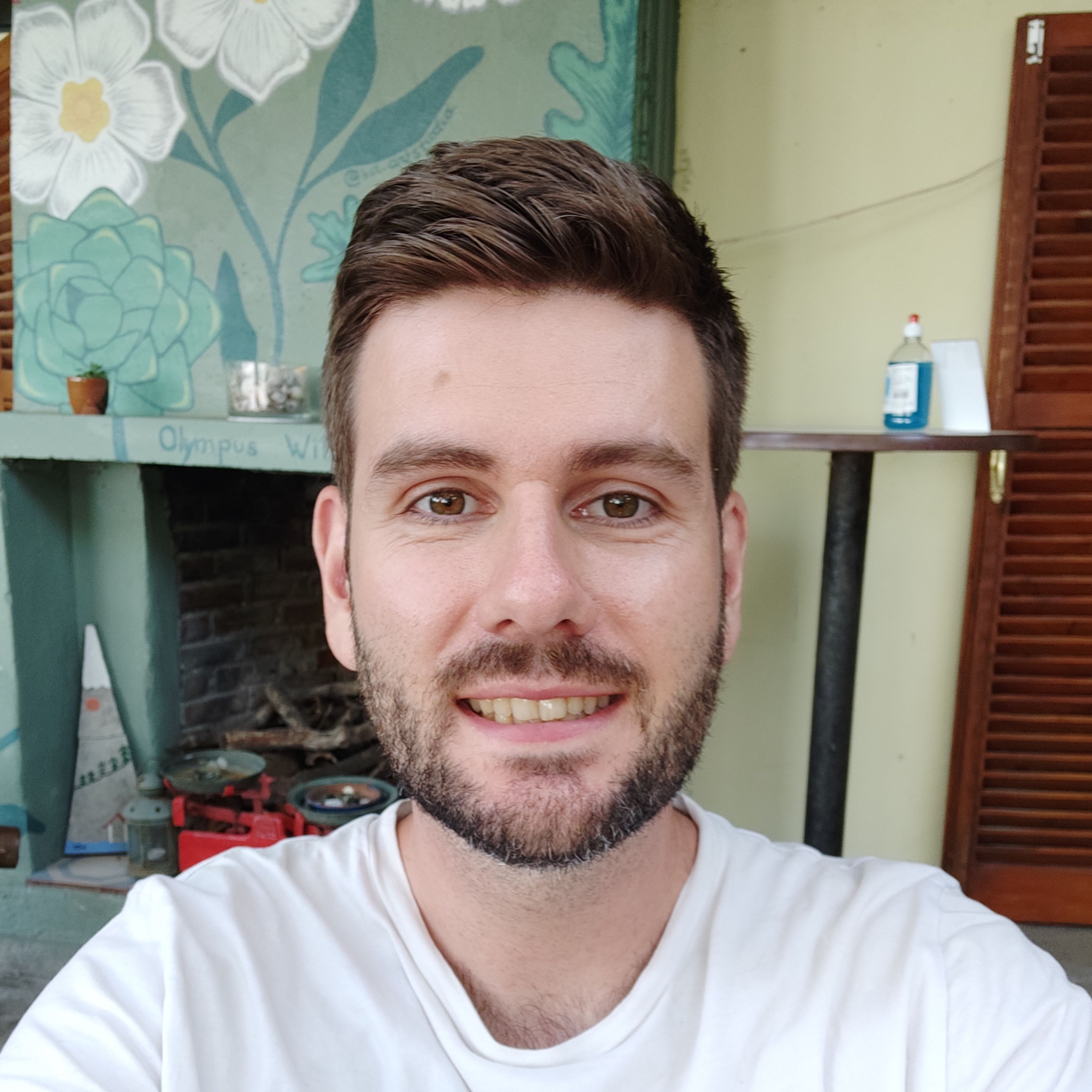 Knowing my trip is coming to an end, Greece is presenting me its most awesome sights in a bid to keep me there. The beautiful coastline of Halkidiki, the unbelievably well-preserved tombs at Aegae, and the natural overwhelming beauty of Zagori were an unbeatable end to my time in Greece.

The three final stops in Greece comprised of arguably the best examples of each category of tourism: the coastline of Halkidiki was the most beautiful I’ve seen so far, the tombs at Aegae and their contents are the best-preserved and most stunning of the historical sites I have visited, and Zagori was undoubtedly the best example of natural beauty in Greece.

A popular weekend holiday spot for those living in and around Thessaloniki, Halkidiki comprises of three peninsulas that extend into the Aegean sea. The first, strictly an island as it is divided by a man-made canal, is geared more towards tourism. The second focuses more on natural beauty with a range of rocky and sandy beaches sometimes accessed from hillsides, although tourism is still present courtesy of vacation rentals, beach bars, and boat rentals. The third mostly comprises of Mount Athos, home to a number of monasteries built upon the mountain, practically only accessible by boat, and rather archaically only open to visit by men.

After collecting my friends Jake and Nataša from Thessaloniki airport, we headed for a long weekend stay at the town of Vourvourou on the second peninsula. From this base we would explore the whole peninsula as well as the nearby island of Diaporos by boat. 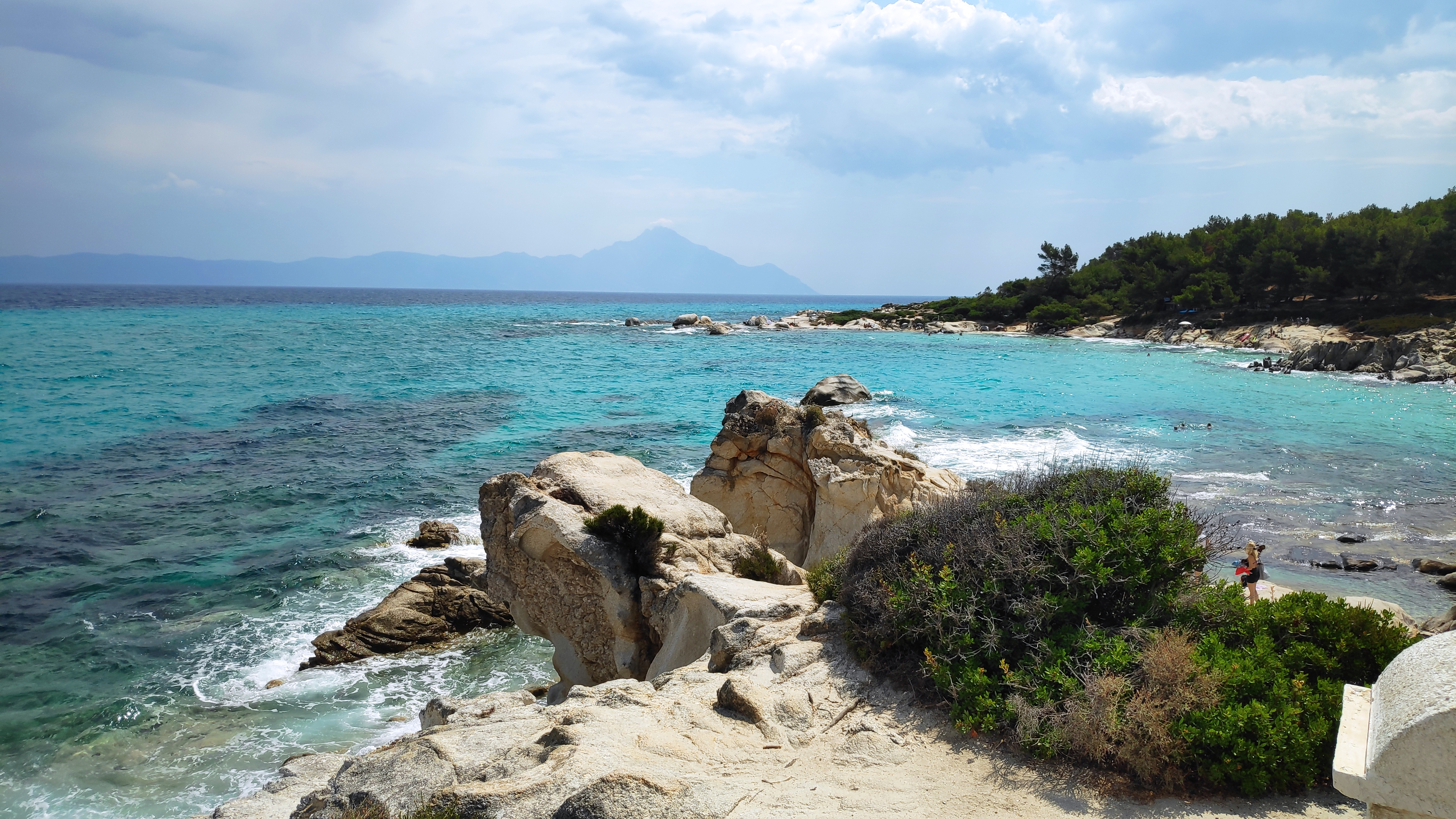 The very clear and blue water at Kavourotrypes Beach

Instead of adding my collection of photos from my phone for this section of the trip, I will instead just let you enjoy this video created by Nataša that does Halkidiki, as well as Mount Olympus, all the justice required.

Halkidiki seems to have something for everyone: a peninsula for partying, a peninsula for natural beauty, and a peninsula with a mountain topped with monasteries. It is easily accessible from Thessaloniki so there really is little excuse for the foreign traveller not to discover and explore Halkidiki.

The Royal Tombs of Aegae

After driving West back past Thessaloniki one may be forgiven for dismissing the small village of Vergina. What actually lies here is not only spectacular but of great significance to the spread of Hellenic culture around the world. This is where Philip II, father of Alexander the Great, transformed the Macedonian empire into one of the world’s greatest influential powers. His well-preserved remains were discovered here in one of the four almost untouched tombs.

Visitors to the tombs enter the archaeological site and are greeted by a small grassy mound which seems of little importance. A small tunnel that takes you underneath the mound suddenly reveals a much larger underground space that plays host to some quite incredible archaeological remains.

The museum under the mound is kept very dark but contains a number of exhibits discovered at the tombs. These range from burial pots and armour to the incredible golden larnax in which Philip II was buried, so well preserved it is hard to believe it wasn’t made recently. 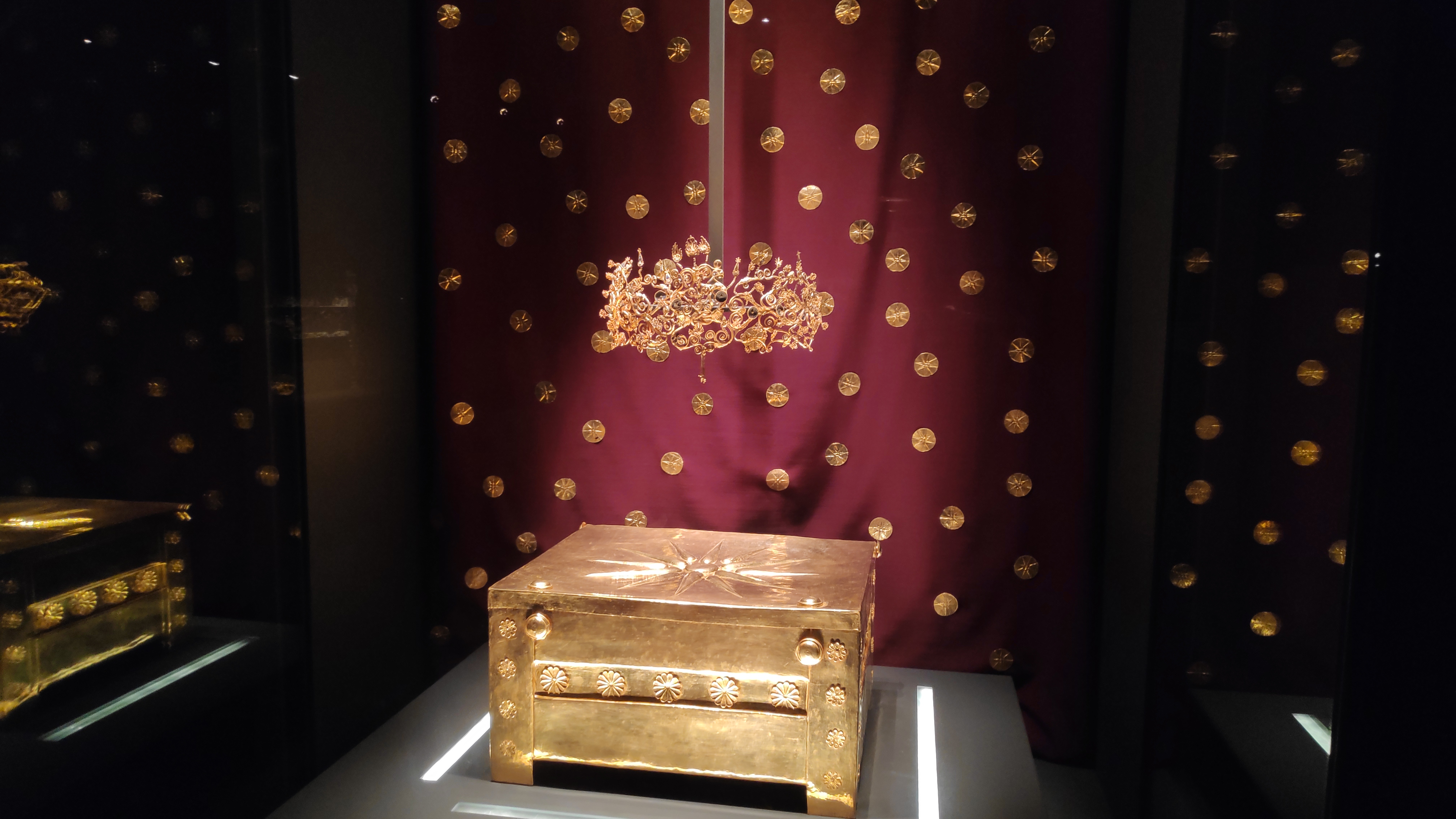 The golden larnax containing the remains of of the wife of Philip II, Thracian princess Meda 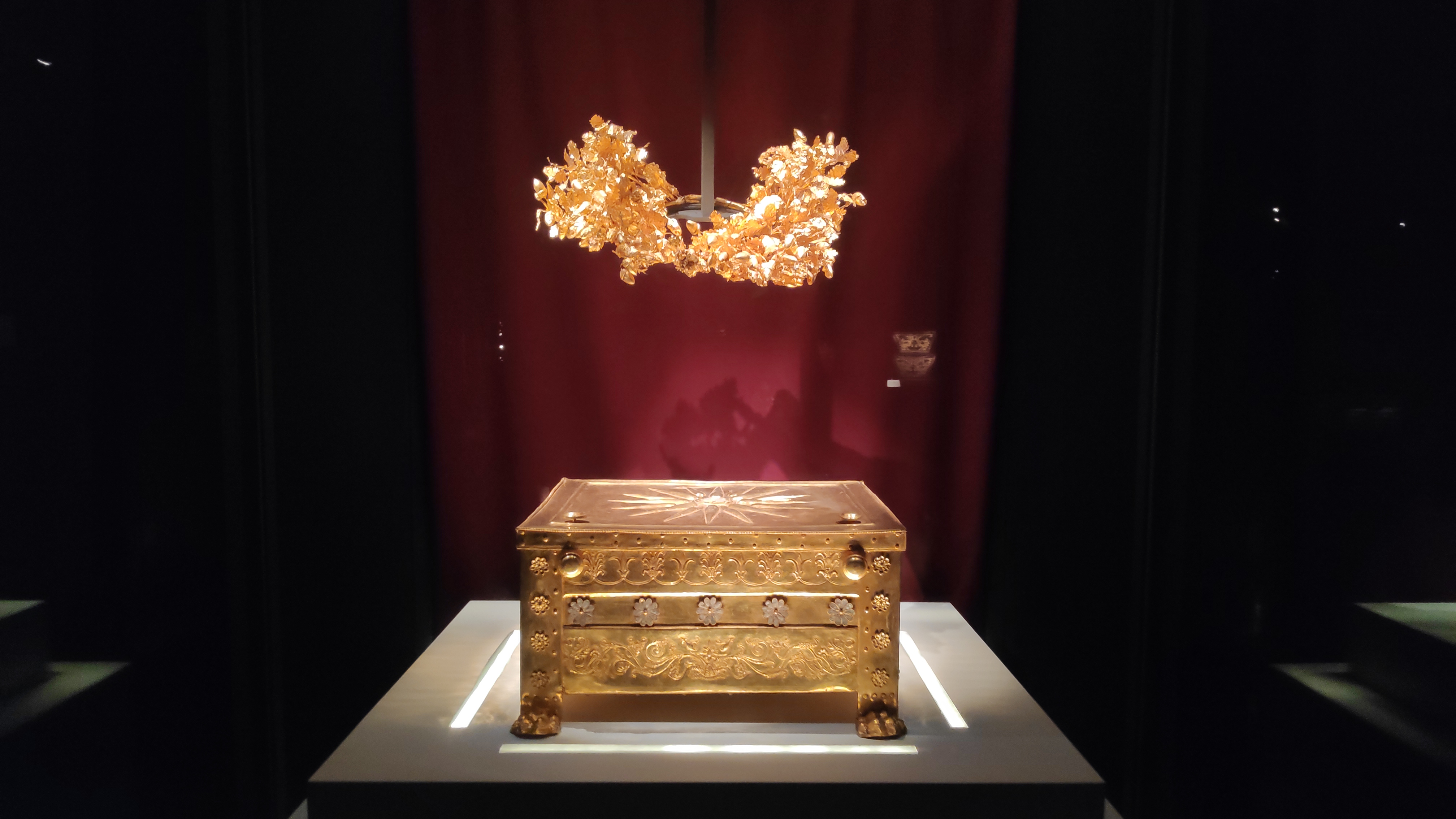 The golden larnax containing the remains of Philip II

There are two staircases in the museum each leading down to the entrance of a overwhelming tomb. The first belongs to Philip II, and the second is believed to belong to the young son of Alexander the Great and Roxane. 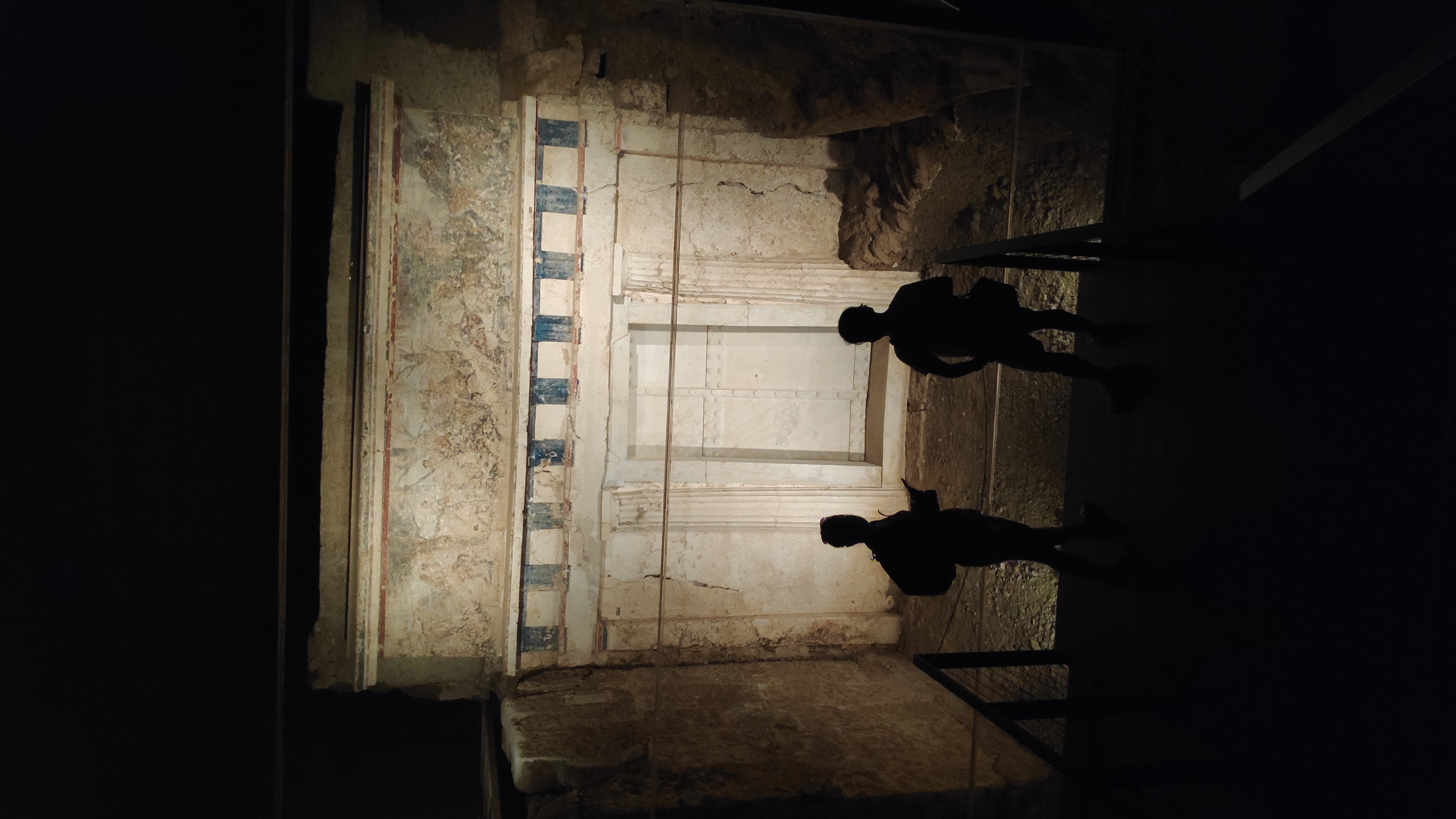 Nataša and Jake admiring the tomb of Philip II 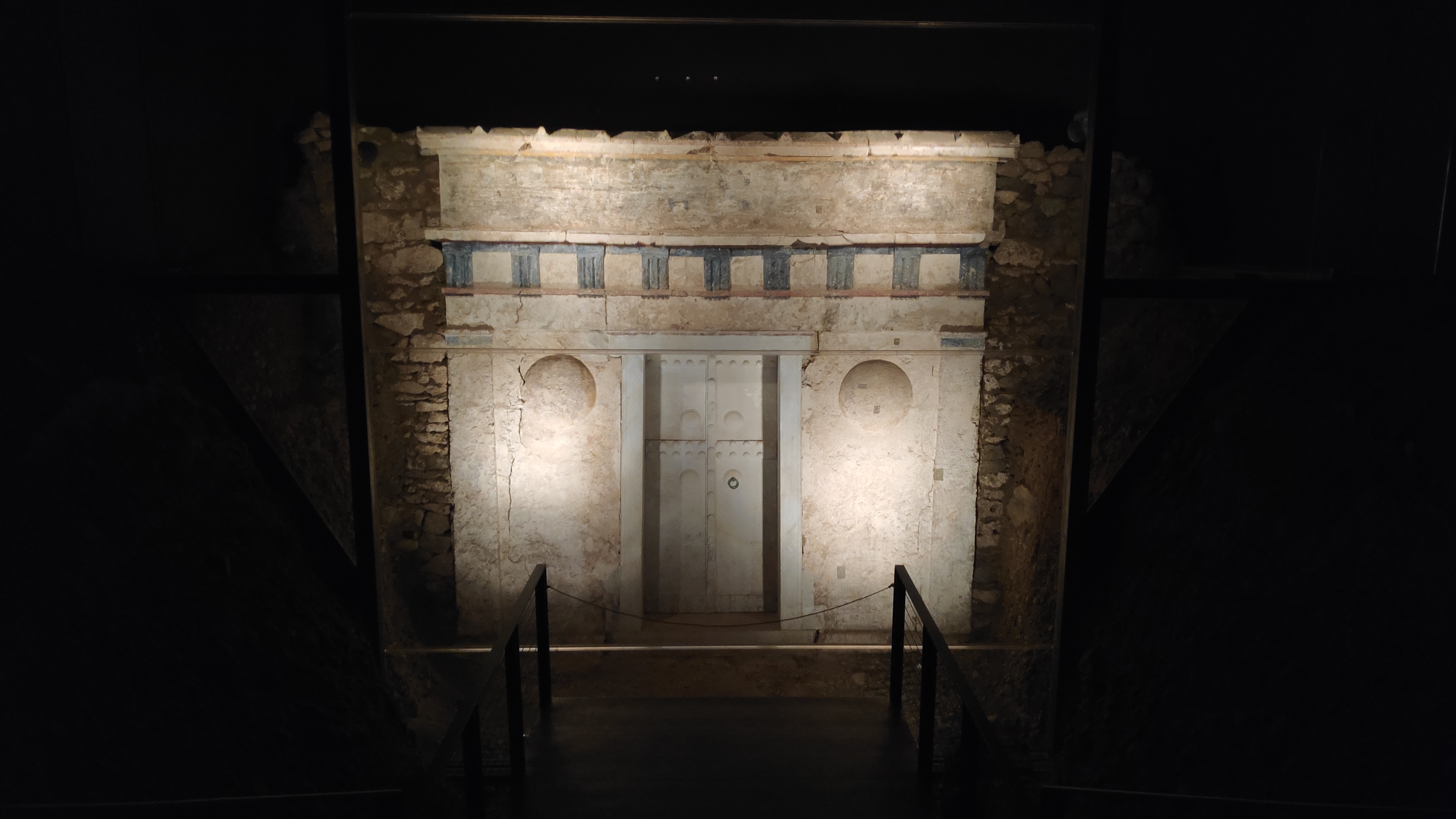 The village of Vergina is slightly awkwardly located, it isn’t along many touristic routes and almost certainly requires a car to access. But if you have the luxury of being able to visit, possibly when going between Meteora and the north of the mainland, then I can highly recommend stopping at this amazing museum.

Zagorohoria, translated as the villages of Zagori, were my last stop on my trip throughout Greece. The area is quite a contrast to the rest of Greece with cooler weather, much greener scenery, and unparalleled views from gorges and steep cliffs.

My accommodation for the last part of my trip was Rokka Guesthouse which had a sweeping panoramic view over the landscape as so many guesthouses seem to have in Greece. The guesthouse focuses on providing some incredibly tasty food sourced entirely from the region. It is by far some of the best food I have tasted in Greece!

Despite only one full day here I managed to undertake two great hikes. I started with the shorter of the two which began at Kokkorou bridge and leads up the gorge. It follows the river, which is dry in summer, and as such is quite easy. Looking up at the gorge gives a good appetite to see it from a more spectacular angle. 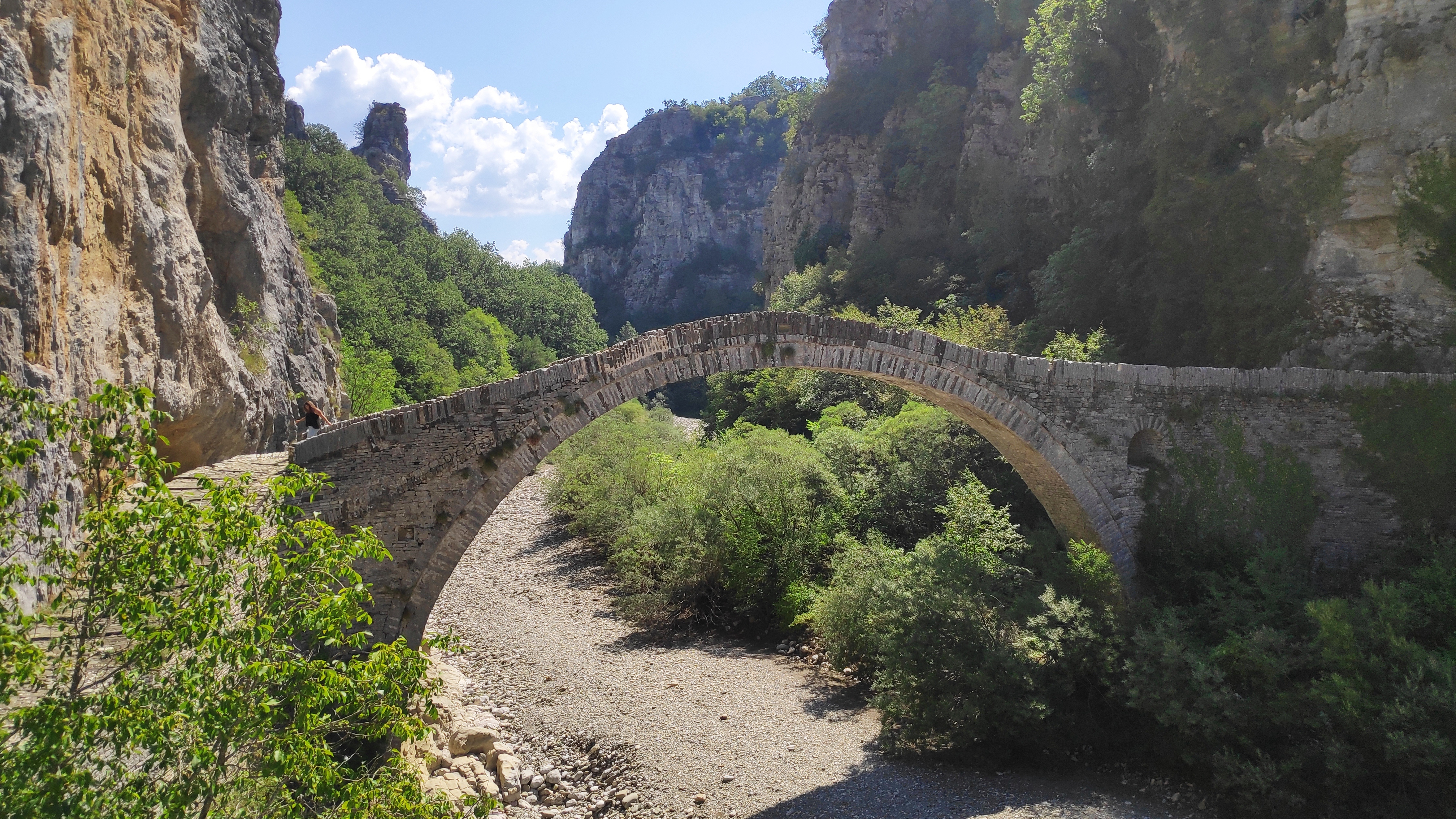 After this short hike I jumped back into the car and headed for the start of the Vradeto Steps. These steps, set into the side of a cliff, were built 200 years ago and until 1973 were the only means of reaching Vradeto. 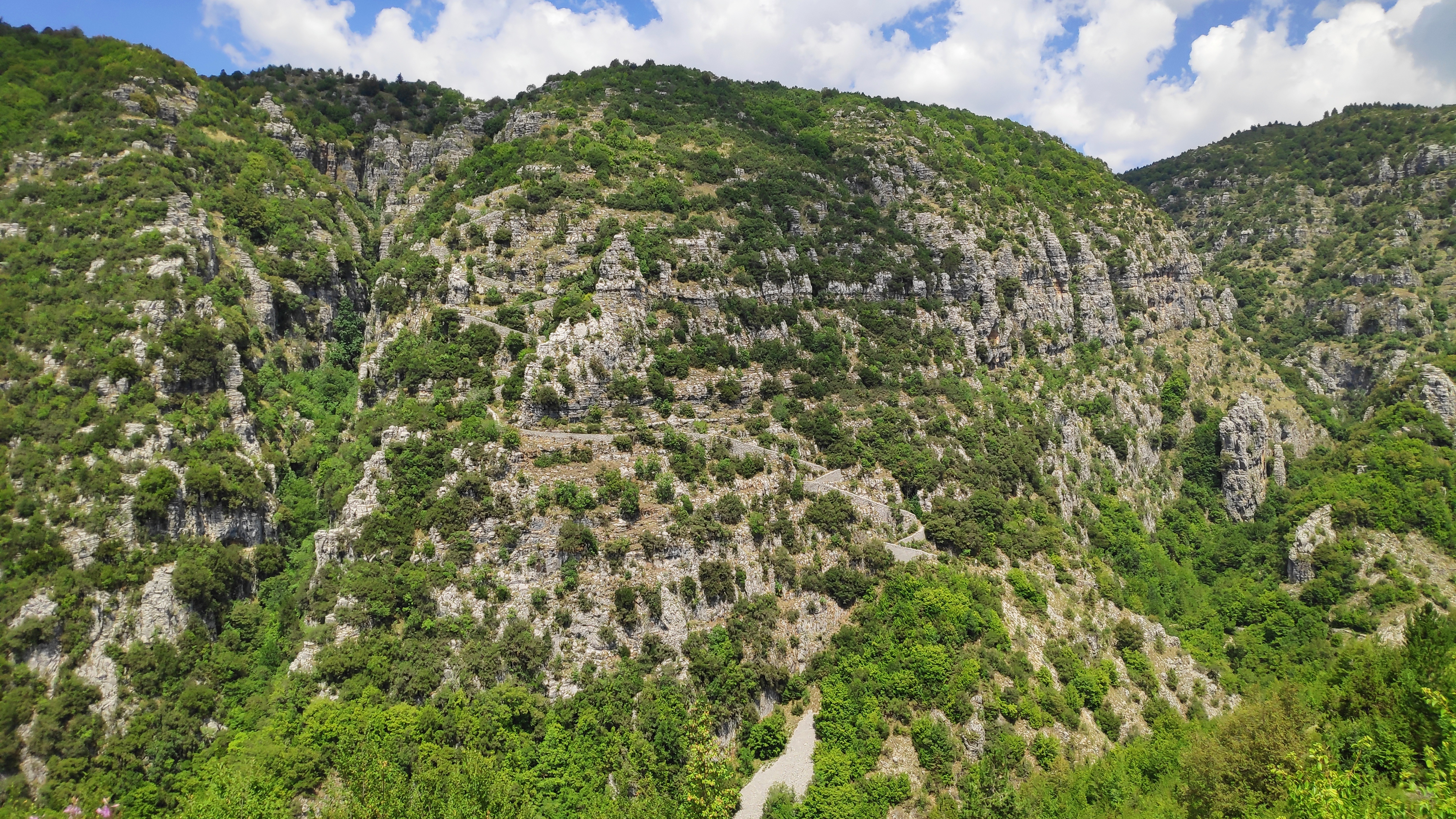 Looking at the face of the Vradeto Steps 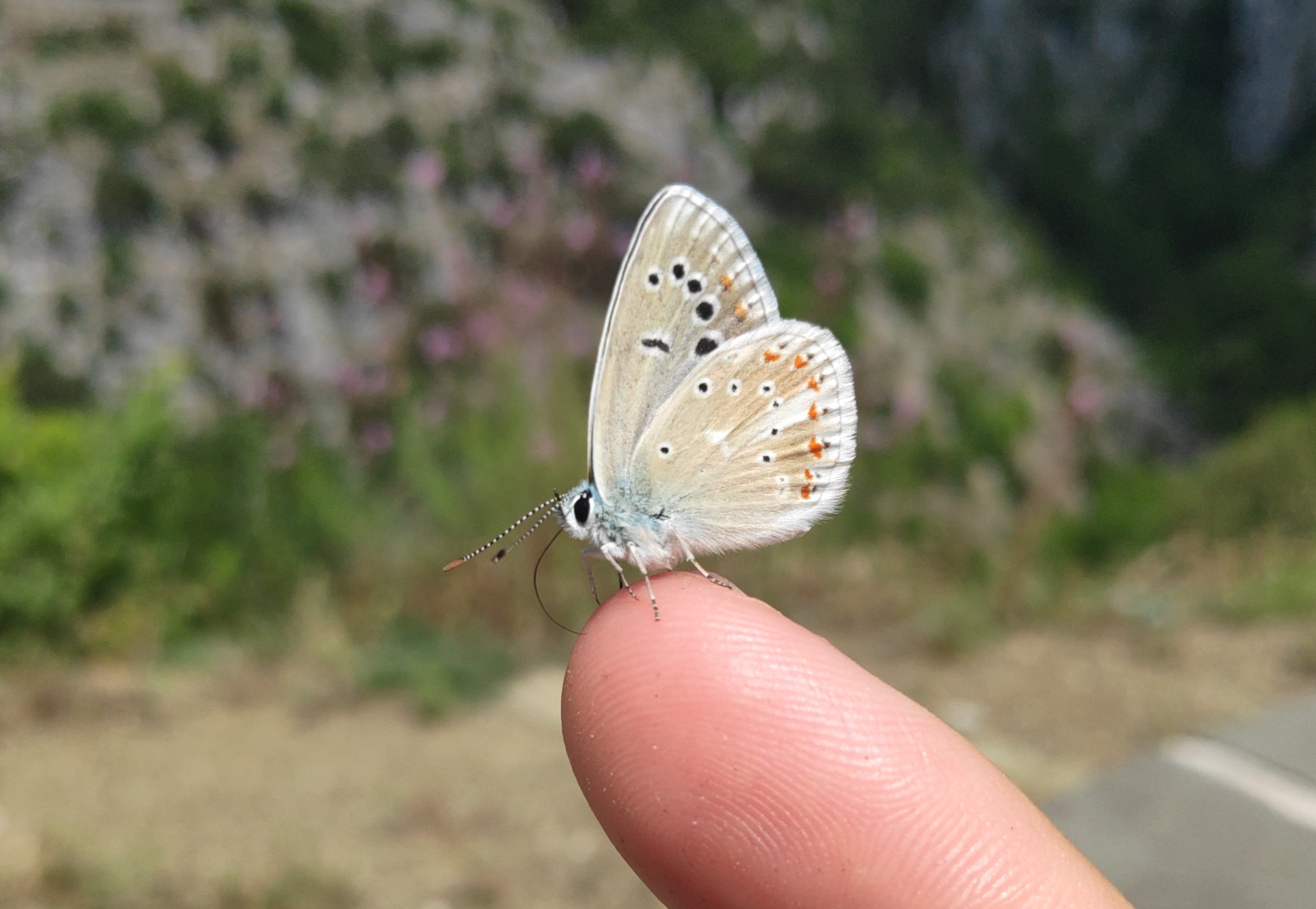 Upon arriving at the starting point for climbing the steps it is not incredibly clear how to reach them as they lie on the other side of a gorge. However just following the path takes you over a small bridge to the base of the steps. Just before that I took the chance to explore the steps and the area by drone.

I then embarked on my mission to climb the stairs. 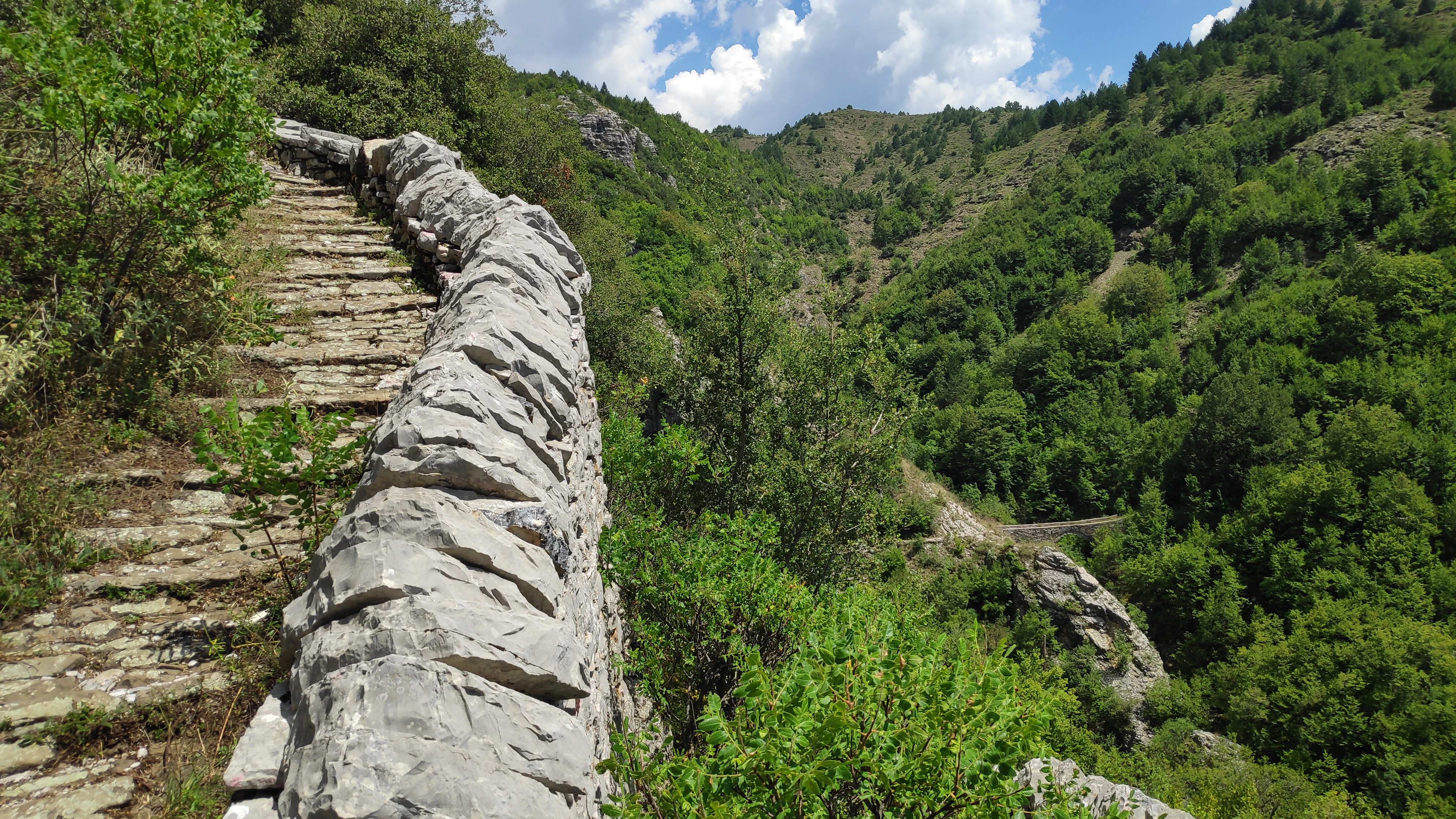 Walking up the Vradeto Steps

1200 steps later and you find yourself at the top and on the way to the village of Vradeto. Through lack of planning I thought I had achieved my goal for the day and took some lunch in Vradeto. Only there I was told about Beloi viewpoint, a short walk from the village. 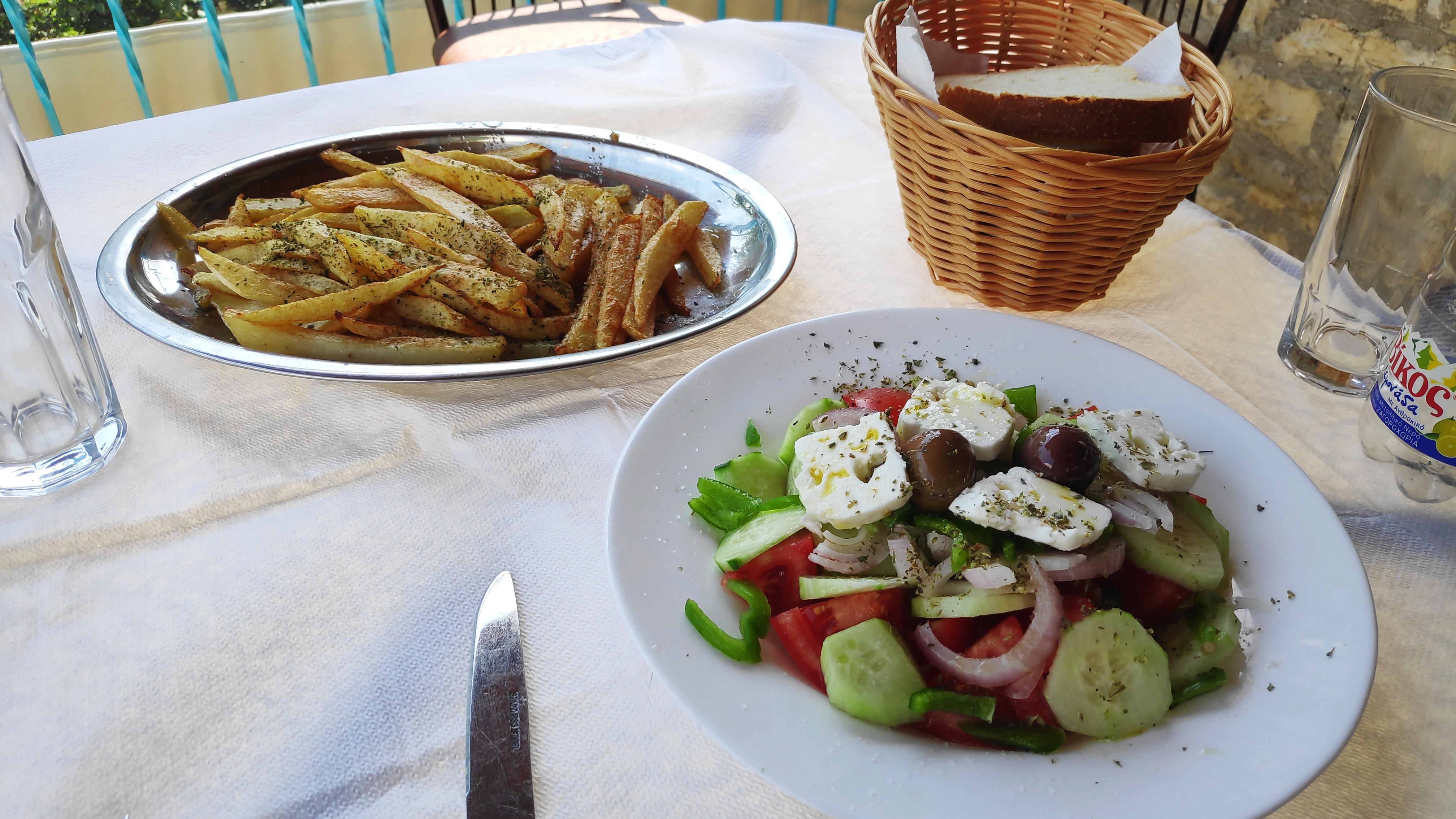 In the end I decided to take the walk and I am eternally grateful that I did so. I reached the viewpoint, my final yet most spectacular view in Greece by far looking down the Vikos Gorge. 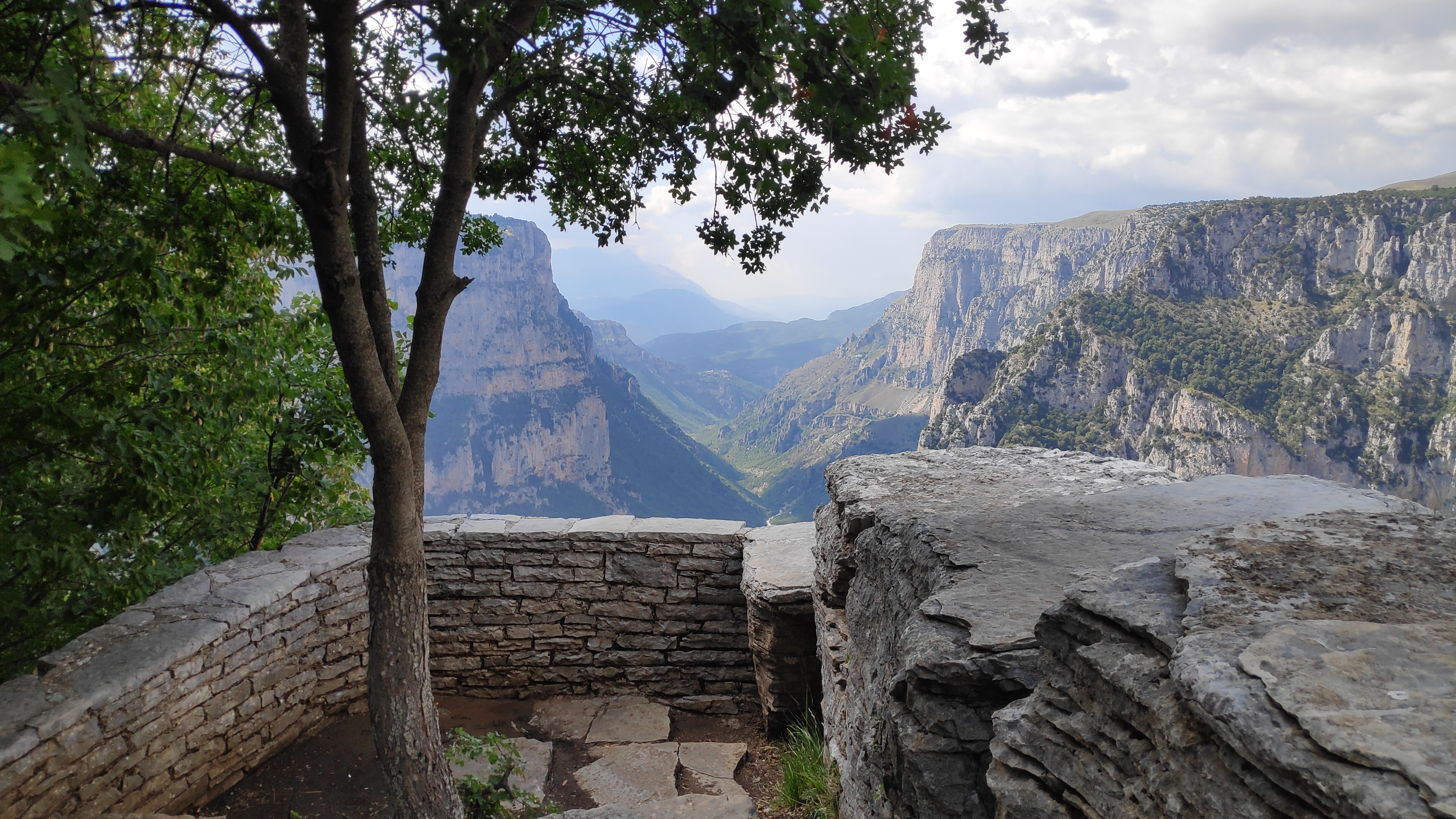 The comfortable viewpoint offers a stunning view down the valley 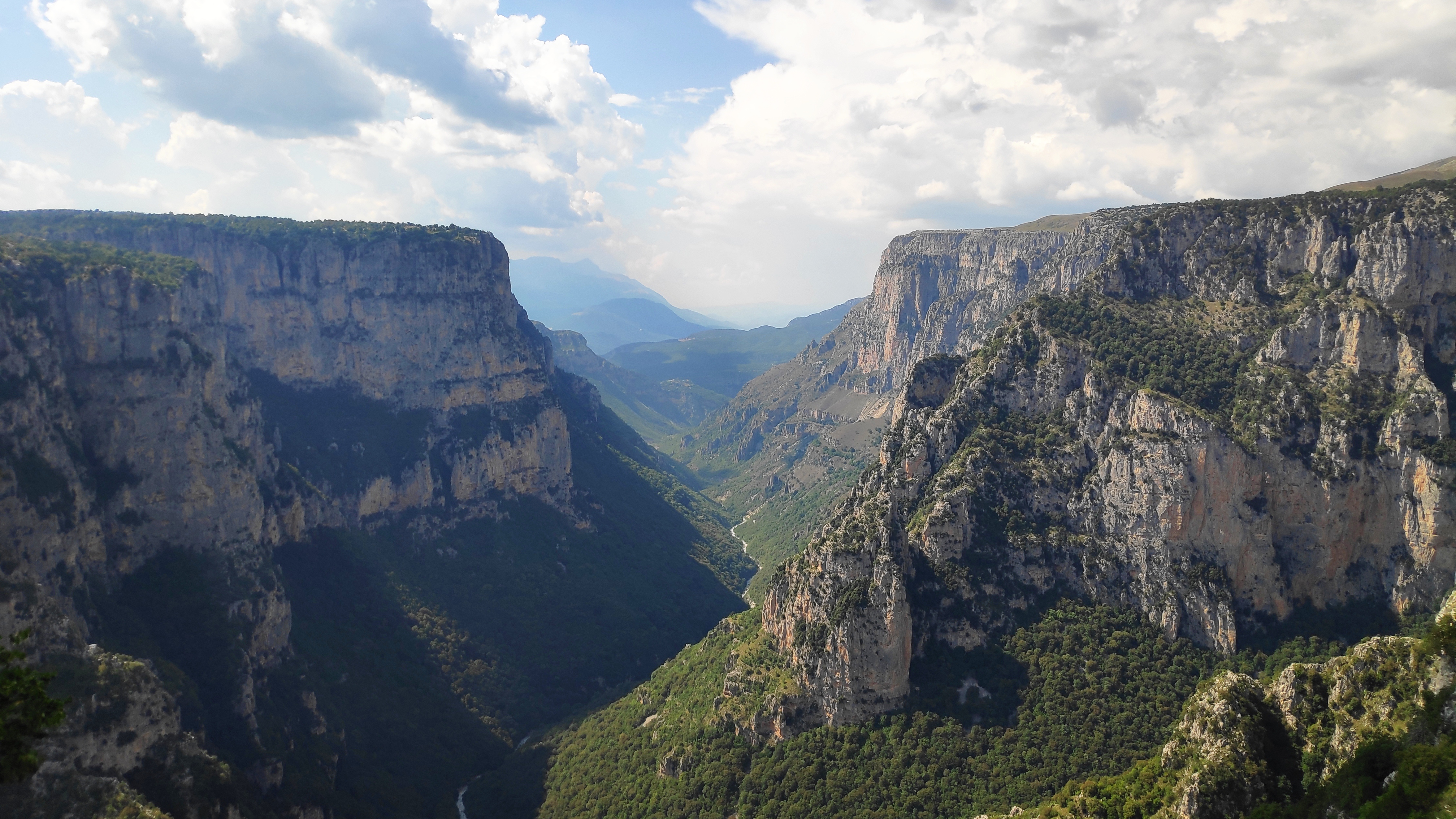 By far the best view I have experienced in Greece, looking down the Vikos Gorge from Beloi Viewpoint

It is hard to describe the placement of the viewpoint set into a cliff, but hopefully the following video gives you an appreciation for the height as well as the view you get.

The view stretches for kilometers down the gorge and the viewpoint itself is at the edge of a very steep cliff. It seems that the sun sets behind the left side of the gorge, but unfortunately I was unable to stay and find out.

I sat there for a very long time taking in the view until eventually some ominous clouds and the sound of thunder encouraged me to head back to my car. It was the perfect final stop in Greece, and the next day I would head to the port of Igoumenitsa to sail back to Italy.